When I was younger, I developed a slight obsession with housekeeping. Oh, not with actually cleaning my house, but with reading books and manuals about cleaning! This started when I was still in my teen years, and I discovered a book called The Messies Manual by Sandra Felton, which taught its readers to clean a room by starting on the left side of one wall and working around the room (referred to in the book as the “Mount Vernon method”). Here is the version I owned: 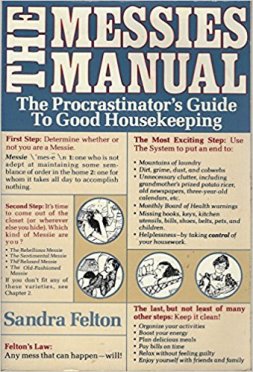 This obsession (for me) culminated around 2005 with possibly the most comprehensive book ever written about housekeeping:  Home Comforts by Cheryl Mendelson.

( If books were priced by their thickness or number of pages, this one would be one of the best deals ever!)

Perhaps this passion really started with the home Laura Ingalls Wilder described in the Little House in the Big Woods, the first chapter book I ever remember reading.

“Ma sat in her rocking chair, sewing by the light of the lamp on the table. The lamp was bright and shiny. There was salt in the bottom of its glass bowl with the kerosene…and there were bits of red flannel among the salt to make it pretty” (38).

Ma always scrubbed her house clean, no matter which little house they were living in (dugout, cabin, shanty, or store), and did her chores and kept a routine, even in the midst of a snowstorm or when faced with hard economic times. Her house always seemed, to me, so cozy and warm. As a young girl, I never realized they lived in poverty most of those years. These routines seemed to truly give purpose to their lives.

Mrs. Wilder actually began her career as a non-fiction writer, submitting articles to magazines (many of them describing farm life on their five-acre home in the Ozarks). Here, in an article for Country Gentleman (published in 1925), nearly one-hundred years ago, she describes some of her cleaning supplies:

“Above the sink are cupboards, one for cooking dishes, the other for the lamps, laundry soap, scouring powders, and so forth. Under one cupboard, against the chimney, is a shelf for my flat-irons, and the towel rack is fastened to a corner of the shelf” (A Little House Sampler, edited by William T. Anderson, published 1988 by Harper, p 142).

She was a believer in housekeeping as a science and, with Almanzo, purposefully planned her kitchen for easy cleaning:

“We painted the whole room white–two coats of flat white and a finishing coat of white enamel. I would hardly have attempted this in an ordinary farm kitchen but mine has no place to catch dust; no baseboards, no window sills, no beveling on doors. Wherever there is a corner it is rounded with a piece of molding and white paint is really much easier to keep clean than dark paint” (A Little House Sampler 142).

In the 1920’s, books on “household management,” cookbooks, and several home magazines were already popular amongst housewives, some of the bestselling published works of the day. A home economics textbook from one hundred years ago instructs:

“Rooms which are in constant use should be swept and dusted every day. A thorough cleaning of each room in the house will be necessary every week or two” (Household Science in Rural Schools published 1918).

This seems reasonable until I see that a weekly cleaning includes dusting everything that is “moveable” and taking it out of each room (while one cleans the floors), brushing the walls and ceilings, washing all of the woodwork with wood soap, taking the rugs outside and beating them, putting everything back in place, and then boiling the used dust cloths.  In the bedroom, one was to also dust the bedframe, turn the mattress, and shake the curtains.

I consider this a yearly cleaning at best, my version involving a rug shampooer. I think every housekeeping book I have ever read from the late 1800’s and early 1900’s insists one must turn the mattress every week and do so for each bed in the house. This explains why beds were so much smaller and mattresses thinner (yes, it was likely the other way around, that the thinner mattresses wore better this way, but I can’t help but wonder)!

Dust, like a villain in a melodrama, was the enemy of an excellent housekeeper. One book from this era explains in detail, perhaps for those young women whose mothers did not teach them:

“Sweep the cobwebs down with your clean broom…get up on your stepladder, and with brush and dustpan, clear the dust from door and window tops, and dust the mouldings with the whisk broom. Brush the walls, and dust the baseboards with the broom, then sweep the floor with light strokes…” (Anna Maria’s Housekeeping pub. 1912).

Published in London, a city fighting against smog, coal dust, fumes, and the refuse of industrialism, the book above instructed one to “time yourself to do this sweeping in fifteen minutes, then sit down for a five minutes’ rest ” and “after you have swept and dusted everything by brushing it, begin cleaning.” Apparently, the real cleaning involved, among other things: boiled water, ammonia, sand, and soap, taking out drawers, washing window frames, clearing the dust from the window locks, and turning the kitchen table upside down to clean underneath.

Kitchen work might easily have consumed the majority of a housewife’s day. It was recommended that the sink be washed three times daily with sand soap or kerosene (please do NOT try this at home) followed by pouring boiling water down the pipes. A good housewife would also scrub “all parts of the inside” of the refrigerator twice per week. Stoves were a completely different appliance then, and care may have involved “blacking” the stove or at least, in the case of a gas stove, rubbing it clean and keeping it filled with oil.

According to The Housekeeper’s Handbook of Cleaning (by Sarah J. MacLeod), published in 1915, “cabinets should be emptied of contents at least once a month and washed thoroughly” (31).

This same book has an entire chapter devoted to floors, the choices including varnished floors, waxed hardwoods, linoleum, and cork. The trend then was toward linoleum (at least in the kitchen and bath) because it provided some support for weary feet. The oiling or waxing of floors was a tedious job, but allowed the housekeeper to wipe them clean on a daily basis. Linoleum needed to be swept with a damp broom and washed with soap and water. Rugs, popular then as now, were swept with a broom and taken outside to be beaten.

In literature, writers such as L. M. Montgomery give us some glimpses of this era as well. Anne’s House of Dreams, published in 1917, shows a young, newly-married Anne as a wife and homemaker. Rachel Lynde comments:

“Anne’s a good housekeeper…I’ve looked into her bread box and her scrap pail. I always judge a housekeeper by those, that’s what. There’s nothing in the pail that shouldn’t have been thrown away, and no stale pieces in the bread box.”

Housekeeping one hundred years ago required energy, planning, and a lot of elbow grease! None of the above even takes into account babies, diapers, or cooking for a family. Yes, housekeeping was more than a full-time job.

This site uses Akismet to reduce spam. Learn how your comment data is processed.

Together we see greatness in the world.

A Home for the Stray Thoughts of an Ordinary Christian Woman