One of my favorite all-time movies, Young at Heart (1954, produced by Gordon Douglas), revolves around the Tuttle sisters, Fran, Laurie, and Amy, in their search for love.

The three girls do find love, but in three very different ways in this remake of an earlier movie and based off of a book by Fannie Hurst. Aunt Jessie (Ethel Barrymore) is the girls’ surrogate mother and resident cook, housekeeper, and psychologist, using her influence to subtly guide the three girls into marriages with the man most suited for each. 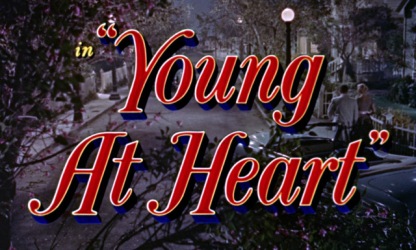 Ethel Barrymore gives a convincing performance as the down-to-earth aunt who seems to be the least in the household, but who actually wields the power.

Charming, happy-go-lucky Alex (Gig Young) the perfect “catch,” a successful Broadway composer who compliments this musically-talented family, pursues Laurie (Doris Day), while each of the three girls falls for him in her own way. Gig Young recognizes and states that “a lot depends on Aunt Jessie.”

Just as Alex claims Laurie as his pick, along comes his old pal Barney (Frank Sinatra), a brilliant musician who is drifting through life. Barney thinks he knows Aunt Jessie’s type, and, although not charming, Barney gains Aunt Jessie’s approval because he is honest and forthright. He wants to know what type of aunt she is, and she tells him she is the “you-can’t-hide-a-thing-from-me type.” 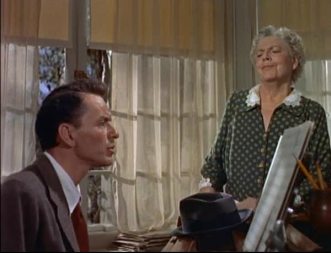 Barney proves to be a challenge for Laurie, for he seems to not know how or care to flirt. He tells her that his masterpiece, a song he has been writing, has no beginning and no ending and that the “fates” won’t let him have a good life. She points out his incredible talent and encourages him to finish the song. 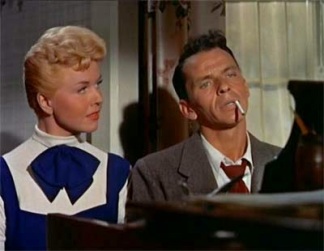 Barney and Aunt Jessie understand each other and share a sarcastic wit and keen insight into human nature. They are the only two who notice Amy’s broken heart. As Barney (Sinatra) croons “Someone to Watch over Me,” Laurie shows the least self-awareness while she is drawn to both protecting this new drifter and sacrificing herself for her sister Amy, not realizing that she can really do neither. 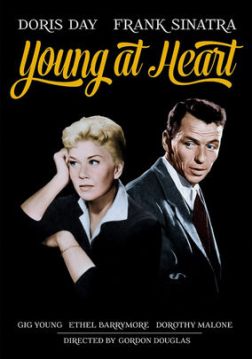 Without giving away the ending, I think this movie has as much of a twist as a romance of this era can have. Laurie must choose between an easy life with Gig Young’s character, who is much like her, or a struggling marriage with Frank’s character, who is her pessimistic opposite. 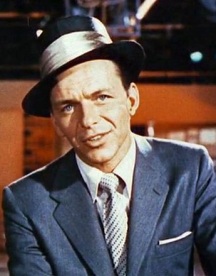 According to Doris Day, Frank Sinatra insisted that the ending of the movie be changed from its original, and the producer gave the star his way (Doris Day: Her Own Story). Years later, when Old Blue Eyes sang the all-familiar words, “I did it my-y-y way,” he meant it!

It is Ethel Barrymore who is the real star of this movie, upstaging even three superstars of the era and creating a character so believable, it is clear that the actress and her character both share a deep understanding of people. Frank Sinatra as Barney profoundly states, “Sometimes when you’re on the outside looking in, you can see things that no one else notices.” 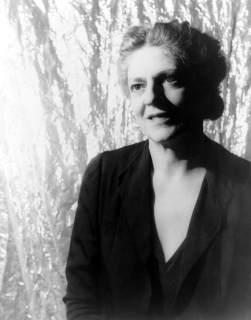 Doris Day remembers the movie in her book Doris Day:  Her Own Story. Day states that Barrymore was “fragile” and nearing the end of her life when the movie was being filmed, spending most of her time in a wheelchair. Yet, when called to a scene, she “was able to produce that special kind of grandeur that was the hallmark of the Barrymores” (149).

Ethel Barrymore was perhaps a little too elegant and a little too polished for the role of Aunt Jessie, but it could be that she wanted to show the wisdom and strength of all types of women–not just the young and beautiful, but also the matron aunts, the elderly, and the wheelchair-bound.  May we all realize that we are valuable and have something to contribute to those around us.

The major themes of this film are not hard to decipher. Love may not come into your life or develop as you expect, and the greatest love is found in a life lived for others.

For more on the Barrymores, go to:  The Third Annual Barrymore Trilogy Blogathon

2 thoughts on “Young at Heart: Ethel Barrymore and Frank Sinatra”

This site uses Akismet to reduce spam. Learn how your comment data is processed.

Together we see greatness in the world.

A Home for the Stray Thoughts of an Ordinary Christian Woman